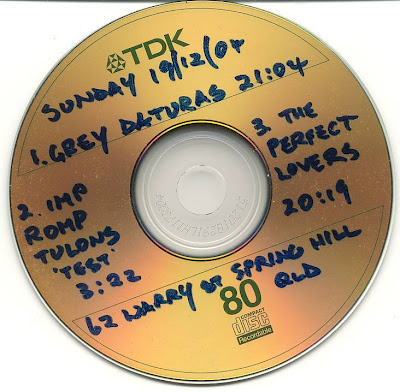 Playing in a carport in Warry St, Spring Hill with the Perfect Lovers in 2004. The honorable Graeme Cakebread would've recorded this set. I played a variety of instruments (mostly drums) with a variety of different line-ups from 1999 'til 2006. Everybody was skinny then. The band released numerous cassettes, CDs and a VHS video - few of which I actually have. I seem to take pride of other people's recorded output, but never my own.

Jamie did wonderful b&w collage posters and would undoubtedly have everything we recorded. This was his band and the rest of us were like Hitchcock's cattle.

We were the loudest band in Brisbane. Even louder (and uglier) than Misery. The Perfect Lovers more often than not had the plugged pulled for being too loud, if we didn't already blow up someone's PA. We smashed TV sets and equipment, some of us accidentally cut ourselves in the spirit of performance and performing.

We played at the IMA and the QCA. We played in an s&m dungeon in a Gay nightclub. And pink palaces; even a driveway too. Somewhere between 20 and 23 shows were performed; all locally - if you count Underwood. We had no songs and no idea of what we were going to play before our set started. We were a brave lot, but not as brave as our audience.

90s Brisbane outfit Tripod were certainly a heavy influence on the band, as were Throbbing Gristle, SPK and Belinda Carlisle.

"I may not look like much by day, but at night I'm one hell of a Perfect Lover."

Just because one can make noise music doesn't mean you should. Perfect lovers aren't noise rock. This project has no real musical talent.

Not that noise is meant to be about musical talent,but Lee Renaldo and kk null can still actually tune thier guitars and play a chord.you all remind me of some sort of pedo club.

Yeah Jamie Hume thinks his something he definitely isn't.