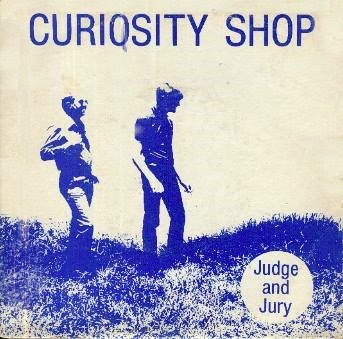 Judge and Jury
Scene of the Shame

In Brisbane during the early 1980s, there was this slew of bands bursting forth onto the scene; from the bands who played at the Queen's Hotel in 1978, to the bands of the Silver Dollar in 1980, the 279 Club of 1981 and the Atcherly of 1982 and so on. Just as venues opened as quickly as they had closed in this golden era of Brisbane music (1978-1982), bands exploded and imploded at a rapid rate. During this time, the Go-Betweens released two albums recorded outside of town, Xero did a 12" 6-track mini LP, while other bands got as far as a cassette or a couple of singles. Some never made it outside of the Ann St practice rooms.

By 1983, the Go-Betweens had well and truly skipped town. The Pits (after a serious amount of shows in 1982) imploded. As so did Xero. The Dum Dums moved to Sydney to only break up shortly after, and Antic Frantic bettered that by heading off to London. Punk in Brisbane moved away from the '77 English model, and leaned more towards American Hardcore influences.

On the other side of the coin, Indie Pop's flag was being waved by the likes of Tangled Shoelaces, This Five Minutes and the newly formed Pits expatriates, the Gatekeepers. Adding to this small list of like-minded bands were Curiosity Shop.

Unlike the aforementioned, Curiosity Shop hailed from Toowoomba...

Whether or not this band is indicative of the Toowoomba Sound is anyone's guess. What's true is Curiosity Shop's lone 45rpm single from 1984 Judge and Jury/Scene of the Shame is a superb slice of indie pop, left abandoned by blogging music scholars until now.

Curiosity Shop were on the Cubbyhouse imprint. This label (created by archivist, film-maker, sound recordist and all-round DIY pop genius Peter Macpherson) also released numerous titles by the Pits, Tangled Shoelaces and This Five Minutes. And Cubbyhouse was also a fanzine running from 1982-84 - much like the life of the label.

The two notable members of this Toowoomba band are Pat Ridgewell and Noel Mengel. Ridgewell around this time played as an adjunct member of This Five Minutes, who by 1986 had mutated into Dog Fish Cat Bird. By the late 80s he played guitar in the Holy Ghosts, and from there he formed his own songwriting vehicle, Small World Experience - who still exist to this day, albeit hermetically. Noel Mengel on the other hand is now the senior music editor for the Courier Mail.

I found this single by chance in 1995, just after I had discovered Small World Experience. I have not seen it since.
Posted by Donat at 2:11 AM