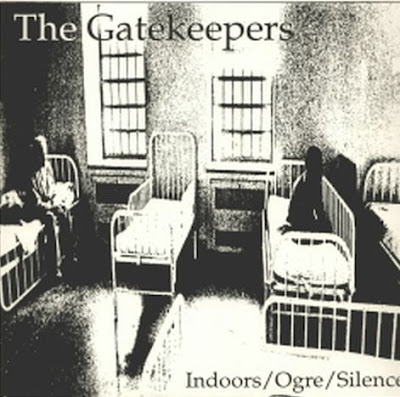 Another one of Brisbane's phantoms, the Gatekeepers. This band began around 1983, containing various former members of the Pits, the Swirl and the Dum Dums. Around this time, they released an 11 track cassette, Cosmic Street - of which two of its tracks appeared in the 1984 cassette compilation Leaving Home for the Party on the Roof.

The early line-up featured Greg Gilbert (aka Des Johnson) on drums, and Margo Hoyt on keyboard in addition to Peter Jetnikoff and Greg Wadley.

Fast forward to Melbourne in 1988, and the Gatekeepers exist as solely as a recording venture, releasing Indoors/Ogre/Silence in that year and a single Saturday/In This House in 1990. In addition to the cassette album and vinyl releases, the Gatekeepers appear on various SPILL cassette and CD compilations (Happy Still from SPILL Compilation One is a must-hear) well into the mid part of the decade, as well as a track on the Brisbane-based Malignant label collection Fuck the White Race from 1994.

This single was released on HWS (somewhat of a precursor to SPILL, who also provided a catalogue number to the first self-titled EP by Small World Experience.

In addition to the Gatekeepers, Peter Jetnikoff and Greg Wadley recorded many cassettes and CDs as the culture-jamming group, New Waver. Their lossy story can be found here.

Greg's brother Ian has played in a host of bands since the early 1980s, and his story can be seen over here.
Posted by Donat at 8:56 PM

I always thought Susan Burns was a good song by these guys.