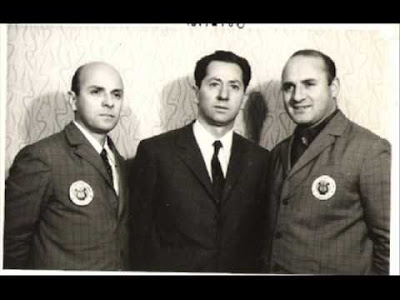 The story of Qamili i Vogël (Little Qamil) is obscured in depths of Yugoslavia's dark and repressive past - where the cultural and musical expression of minority groups made for a trying expressive experience.

Born in the southern urban centre of Gjakova in 1923, Qamil Muhaxhiri singlehandedly created a popular genre of ethnic music within the thin bounadaries of modern-day Kosovo and presented it to not only his people, but to the record buying public at large.

Qamili i Vogël composed, recorded a total of 80 original songs, many of which were initially released as EPs on the Jugoton label in the mid 1960s. His vinyl debut was the first for a Albanian artist to commit to tape for a state-owned recording company in Yugoslavia. 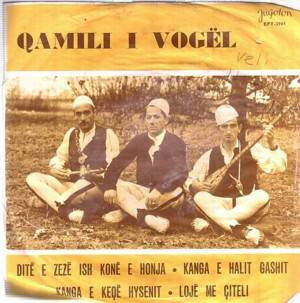 Second to his work as a singer and songwriter, Qamili i Vogël publish books of Albanian folk songs for the public to learn and perform; a concept which was previously unheard of at a time when Albanian was not recognized as a national language in Tito's Bratstvo i Jedinstvo - brotherhood and unity - of Yugoslavia.

Despite these historic firsts, his compositions today aren't copyrighted; his compositional credits are absent from interpreters of his work, and since his death in 1991, Qamili i Vogël's songwriting and compositional catalogue has not seen a serious reappraisal outside of poorly packaged and annotated bootleg cassettes and CDs drawing from his career-long association with the Zagreb-based label Jugoton.

Information on his discography is scattered and blurred, as is any biographical information. Though with the rising popularity of Youtube, many home-recorded videos from the 1970s, state television appearances and a snippet of a career biography have began to slowly appear on the video-sharing website in the past year.

This video offers an interesting biography on his life, detailing his work, starting as a singer for Albanian language radio shows in the fifties, and as a graphic artist for the Rilindja newspaper, amongst other insightful detail intertwined between dedicated music videos which would've been screened on Radio-Televizija Pristina in the 1980s.


And this is not to say that his musical legacy has been forgotten; many artists to this day do covers of his songs in both the recording and performing fields alike within Kosovo and the diaspora. His compositions have lent to a style of music named after his birthplace, Gjakovarë contempoarily spearheaded by the tenor, Xeni.

One particular purveyor of his songs is Ismet Peja, and like a Dardanian Sinatra, treats his arrangements and vocal inflections of what could be only described today as Kosovar standards with a great sense of respect for Qamili's melodies and deeply emotional phrasing.

Peja, along with Mazllom Mejzini (both pictured above) were frequent vocal collaborators who in turn held successful solo careers as vocalists. Qamili i Vogel also sang alongside Sofie Hyseni, Bajrush Doda, Hamide Sadiku and other revered Albanian folksingers of the sixties and seventies. 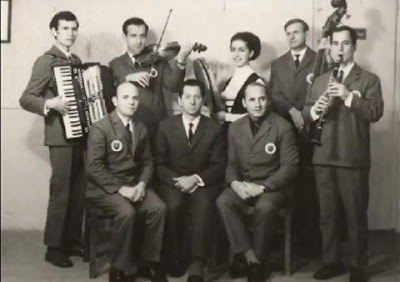 Qamili i Vogël's group, Hajdar Dushi in 1969
Back row: Sabah Bytyqi, Gongje Qaushi, Bardosh Rudi, Masar Peja
Front row: Mazllom Mejzini, Qamili i Vogël, Ismet Peja
This collection of 23 songs is one of those aforementioned CDs, which I purchased (after a great deal of fishing around various marketplaces) in his hometown in 2007. This set represents a balance of his early work; a minimalist orchestration of ethnic Albanian instruments with violin; and his later big-band orchestral work - adding clarinet, classical guitar, mandola, harmonium, piano accordion, and secondary male vocalists.

Listen here
Posted by Donat at 2:53 AM

Congrats about the text. It was fascinating. I'm relatively young but I grew up with stories about him, his songs and his texts which can cause strange emotions every time you read it or hear it. The one and only. Respect!

Thanks for the kind words. Seeing that no-one's bothered to discuss this great man's work in English, I thought I'd write something about my favourite Albanian singer/songwriter.

Especially Qamili i vogel and Mazlom Mejzini have great contribution for the establishing a base for the Traditional Folk Music.
Qamili Vogel author of 90 albanian songs and Mazllom Mejzini author of more than 75 songs which today are hits and evergreens in Albanian Music.

His work is pure genius - it's that simple. Such hauntingly beautiful songs.

seconded with utmost sincerity on the re-up request!!

I have somewhat abandoned this blog as I am about to resurrect another one with an Albanian music theme.

If anyone's reading this, I am currently compiling a CD collection of Qamili i Vogel's songs and I'm urging anyone who may have his vinyl or cassettes to get in touch with me.

I have a fair few, but there's many I don't have.

I'm happy to credit anyone and send off the finished CD to those who can assist me with photos, articles or recordings of Qamili i Vogel's music from the 1960s to the 1980s on the Jugoton label and elsewhere.

I have tried to contact Jugoton in the past but to no avail.

So if anyone can help me in my quest, feel free to get in touch via here or Facebook.