Stars in the Sky

A classic slice of mid-70s power pop, courtesy of Dan and David Kessel under the moniker of Stars in the Sky. The Kessel brothers are the musical sons of Barney Kessel, the tasteful postwar jazz guitarist (Pete Townshend is a giant fan) who was a fine band leader and an in-demand L.A. session musician who famously played on the classic Brian Wilson productions of the mid-60s and was a member of Phil Spector's Wrecking Crew.

Rumour has it that Spector himself produced this record - but who's to say?

As producers (using the names Dan Phillips and David Scott), they've worked with legendary artists with names like the Shangri-La's, the Ventures and American Spring to name a few. Sadly the bulk of these recordings have never surfaced, or are available on bootlegs.

A lot of the Kessels's work outside (and sometimes in) Spector's sphere involves the New York punk identity Blake Xolton (who in turn will get his name in lights in a future offering from this blog). It's been told that Xolton sings backing vocals on this 45.

Through the late 70s and early 80s they ran Martian Records, releasing 45s by Cheri Gage and the Wigs to name but two. In fact, Baby Hold On was released as the Martians on various Bomp! compilations, including Straight Out of Burbank.

The bottom line is the Kessels story is somewhat mysterious - hidden under veils of pseudonyms which are proving hard to get around. A Kesselography will follow once the paper trail's sorted.

What's most important is the music and their obvious respect and unfaltering admiration for Phil Spector's music, and you really can't argue with that. 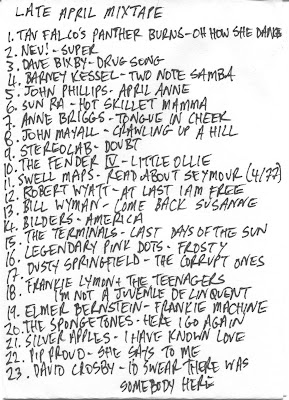 find it here
Posted by Donat at 5:41 AM No comments:

Labels: mixtape, need something for the car or lorry?, various artists

Phantoms of Brisbane #1 - BIRDS OF TIN 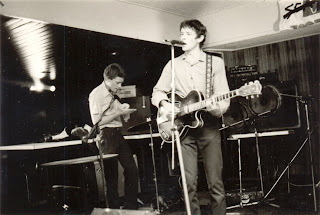 Brisbane's post punk musical landscape is dotted with forgotten artists. Some get mentioned in reference books or in historical overviews, and others get left behind for one reason or another. Like many cities across Australia and the world, the direct influence of the punk and new wave scene of New York and London resonated strongly within the inner-city Brisbane music scene up until late 1982.

In the case of Brisbane, the Cure's 1980 tour and the Talking Heads tour a year earlier resonated among Brisbane musicians in the same way the Saints influenced a tiny pocket of groups to pick up their instuments and get out of the garage in '76. Subsequently, single guitar bands began popping up around town, and Birds of Tin are one of those bands.

Much like the Go-Betweens of 1980-82 and the Four Gods, Birds Of Tin explored unusual, jerky rhythms housed within well-written three minute pop songs; existing long enough to create a cassette EP housed in a 7" record sleeve.

Peter Loveday (guitar, vocals) and Michael Elliott (bass) played in Mute 44, a short-lived pop band who performed at such venues as the Silver Dollar and Pinocchio's around 1980. Loveday had previously played with The Supports, an early pop band who famously traveled on a double-decker bus alongside an infant Go-Betweens and friends up through the North Queensland coast in late 1978.

The Supports made up the basis of Antic Frantic, Loveday's post Birds Of Tin group who played a small handful of shows around Brisbane before relocating to London as Tiny Town, releasing a full-length LP a mini LP and a bunch of 45s. More about these groups in a future posting.

Loveday and Elliott with the addition of Four Gods drummer Keryn Henry played around town in early-to-mid 1981 as the Sea Bees, and with the addition of percussionist Tony Hayes became Birds of Tin. Their only release is a four track cassette, recorded by Repairs neé FX guitarist Colin Bloxsom. Artwork by Peter Loveday. 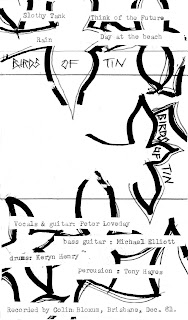 Below is a complete list of their known live performances:

* as the Sea Bees

"The short-lived Birds of Tin created some excitement for a while. Rumoured to be "just like the Go-Betweens, only better," they did lend to credence to that band's theory that there is a "Brisbane sound" and that they (the Go-Betweens) are it. Unlike the Go-Betweens, however, Birds of Tin did not have any driving ambition or talent for self-promotion. Their talent lay simply in their musicianship and the quality of their writing, although faced with the problem of having to come up with a set of material quickly, they did sound a bit repetitive at times."

X-Change: A Fanzine about modern music, Brisband people and other nonsense, Issue 4.


Peter Loveday has since relocated to Spain, making wonderful solo albums. His music can be found here: http://peterloveday.com/
Posted by Donat at 10:08 PM 9 comments:

The Verlaines - A review of Self-review and review of review

I can clearly see the issue at hand here. Critics pulling bands apart, and then band pulling apart the critic's review of a live show out of their anger over the reviewer's lack of understanding or scope. The Stranglers were a band who certainly loved to take their pound of flesh out on rock scribes, so it's good to see the Verlaines having a go at it as well.

Graeme's writing in print or in lyrical form has always fascinated me, and it's always great to see musicians go over someone else's body of work... but it's even more interesting when a review gets a rebuttal from the band themselves. I like it for scope; you read both sides of the story and go, "ahh fuck yes!" And for whatever reason, too.

In a previous post, I did have issues with the Verlaines more recent output. Nothing too huge, just a little delusion on my part. See, the thing is I like the Verlaines ca. '82-'89 more so than say '89 to now. That's not to say I don't enjoy their recent output. At the end of the day, I'm fucking grateful that they still exist - even if it's not a dream line-up or what-have-you. Gotta keep the fantasy and reality at different poles. I copped a beating from Darren Stedman about this, but I now consider myself redeemed. It all makes clear sense to me.

Hindsight's shown that the Verlaines are an evolving creature, and not a Flying Nun era jukebox. Are there that many people out there who've seen a recent show and thought to themselves on their way home, "shit, they didn't play Icarus Missed"? Probably not. Graeme's written a lot of rockers, ballads and chamber pop pieces - surely there's going to be a 100 odd songs that aren't going to make any given setlist.

Corporate Moronic has been out for over six months, and where's the harm in playing most of the album? I for one would like to hear how different a live version of Paratai Drive would be to that of the studio arrangement.

One of the odd moments of the rock critic's analysis of the show was how Graeme Downes was working the door at the venue. Why not? An audience member would be eyes glued to the band, so why not have Graeme eyeball and stamp every patron who comes in to see him?

Something tells me that the reviewer from Real Groove owned a copy of their "Greatest Hits" album (err... You're Just Too Obscure For Me FNCD476)and perhaps a promo copy of Corporate Moronic and set out to cover the events of a near 30 year old band. I guess it doesn't really work that way. Knowing who you're going to review helps. You don't need to know that Jane Dodd's played nothing but a Gibson Ripper bass, or who did the cover art for the Over the Moon record, but perhaps the understandings of a working band would help.

What I would really like to know is: what was the setlist?