Tony Bennett - The Beat Of My Heart 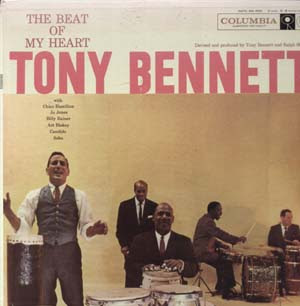 This 1957 record by Tony Bennett is an unlikely record to have inspired the Laughing Clowns and their quest for brilliance, but with its array of drummers - Art Blakey, 'Philly' Joe Jones, Chico Hamilton and Billy Exiner; it's little wonder that after a close listen, you begin to hear the influences. For my crooner dollar, it's hard to beat Sinatra's In The Wee Small Hours, though this baby comes pretty close.

This title was released on CD in 1997 as a part of Columbia's Best Value series and Bennett's own Master Series alike. Naturally, it's out of print on the convenient format.

I have chosen not to include the bonus tracks, as they wouldn't have been able to fit here
Posted by Donat at 11:30 PM 2 comments:

To put things into perspective, this band formed in 1979 with former members of the Saints, a school chum with a horn and two cousins from Melbourne. Many line-up changes, record labels and a string of flawless records before the band imploded with little fanfare in December 1984.

Precious few books reference the band, while rock journalists ranging from Clinton Walker, Ian Macfarlane and Everett True (more on him later) have often elevated this band to Godlike status.

The ABC documentary on Australian rock 'n' roll Long Way To The Top acted like this band never existed. It was as if Ed Kuepper did nothing when the Saints split and decided to open a bookshop for six years and suddenly appeared out of the ether to release a dozen plus records under his own name?

Some people called this music jazz, others called it punk; while many called the Laughing Clowns jazz-punk. The Go-Betweens tried to copy their style on their first record. The Birthday Party took similar cues. The band wore suit jackets well before Nick Cave and his Bad Seeds applied them as their uniform of choice.

Having been lucky to see Louise Elliott play an epic fifteen minute blast of 'Eternally Yours' with Ed Kuepper and Jeffrey Wegener at Dingwalls in Camden two years back, I figured that a Clowns reunion wouldn't be too far off. After all, it was the friction between the two men that saw the band disintergrate (amongst other conspiracy theories).

Nick Cave curated this year's All Tomorrow's Parties for its Australian festival debut. It's well known that Cave is indeed a fan of the Saints, often stating that 'This Perfect Day' is one of his all-time favourite 45's. Yes, the original Saints did indeed appear at ATP and recieved mixed reviews, mainly from Chris Bailey's refusal to take things seriously. And that's another story entirely, and one not worth worrying about here.

It was little surpise that the Clowns were asked to play at ATP, given the fashion tips and overall musical and lyrical influence that appears in Cave's music since the late 70s.

With Louise Elliott living in London, Les 'Bif' Millar happily teaching the art of bass in Adelaide and Jeffrey Wegener residing in Sydney, a reunion of at least the 2nd line-up of the band wasn't going to be easy. With Peter Doyle awol, the line-up that appeared on the Everything That Flies 12" seemed like the line-up Kuepper was going to put together at Cave's invitation.

When a band's had so many line-up and sonic shifts in such a small period of time (five years, if anyone's counting), the thought of the band playing a carbon copy of a particular vintage seemed stupid. Thankfully, this never took place.

Having been a fan since the early 90s and having been a little too young to have experienced the band in their prime, I was expecting a great deal from whom I regard as my favourite Australian band.

Everything was there on stage: Kuepper's flattened fifths, Wegener's 16th note rolls, Elliott's borderline overblowing of the tenor, Millar's enthusiastic fretless runs, and so on. Sydney keyboardist Alistair Spence filled the empty spaces with his washes of synth and piano.

The bottom line is: the Clowns didn't make me feel embarassed for loving them in the same way the Velvet Underground did for me in 1993.

To this day, I still can't fathom how the Clowns would have been received in 1979 around the Sydney venues when they walked out from their season-long rehearsals and to the stage. But in 2009, there were more people at ATP witnessing the Clowns than the fashion-savvy Spiritualized, but who's really complaining here?

Their show at Brisbane's Gallery of Modern Art held a week after their ATP shows in Sydney drew a crowd of close to 800 people, with one known walk-out from Everett True - an English writer well known among rock music readers who recently published a rather interesting review of the said show for the Guardian.

True Tales: Why I walked out of a Laughing Clowns Gig

The salt 'n' pepper beards were there in the audience, true. The band are no longer a secret held by a precious few record collectors and rock writers, true too. The sound was fine from the middle of the room, coming out of the PA and the band alike.

He's right about the fact that they are "the greatest live rock'n'roll band in the world ever, full stop." Yet, he's wrong about everything else.

I'm glad I could witness this moment, and I look forward to the three shows that've been penciled in for the winters. The days will be dragging along until then.
Posted by Donat at 9:26 PM 4 comments: