Would the Real Johnny Greenwood Please Stand Up? 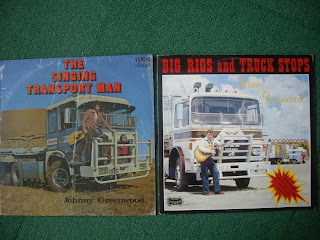 There is almost nothing on the internet about Johnny Greenwood, the Australian country artist. The man has a delicate, frail voice - almost in a Pip Proud sort of way. The only records I have managed to find thus far are The Singing Transport Man (RCA 1976) and Big Rigs & Truckstops (Colonial). Both records feature a great deal of his own compositions, many of which have appeared on various Slim Dusty Truckin' albums. Each time I go and play his music on last.fm it assumes I am listening to some guy from Radiohead, which to me is quite an insulting insinuation if I've ever seen one. I believe he used to host a Country Music program on Logan's 101FM once upon a time. These two albums are well worth looking out for if you're a fan of Trucking Country records.

What I did find was this little blurb on a site called Queensland Country Style, which had this to say about the great man.

Johnny was born in Brisbane 1939. He started singing and playing in 1955 and was one of the first country artists to appear on television. His first record was "Loving Arms" on W & G label - more records followed and encouraged by their popularity spent many months performing overseas in Great Britain, Europe, North Africa and New Zealand.

Johnny’s biggest recording success came signing to RCA records that included "The Goondiwindi Grey", "Tibrogargan" and "The Singing Transport Man" - he also recorded for "Astor & Colonial" labels having sold well over 100,000 records to date. At one point made the top 20 Parade, outselling Elvis Presley, David Bowie and The Sweet.

One of the highlights of his career was being the support act for the Marty Robbins Tour in 1967.
Other highlights has been appearing on TV Shows with the likes of Country Homestead, Conway Country, The Late Show, John Crook Show, Country Roads, That’s Australia and Must Be Country.

Inducted into the "Hands of Fame" in 1980 and is still performing today - all this mainly as part time performer.