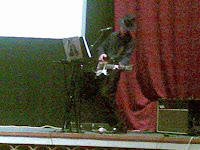 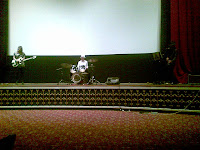 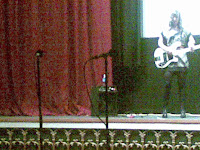 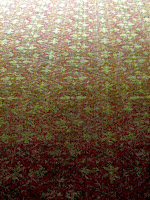 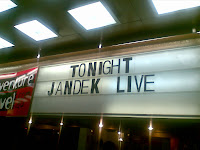 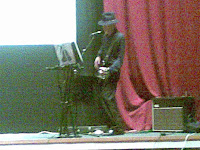 I don't think in my wildest of rock 'n' roll dreams that I would ever see Jandek play - let alone in Brisbane. And I don't even remember how I found out about Jandek's music in the pre-internet daze, but I do recall buying his albums at Red Eye in the mid-90s. The record covers were striking; and the music itself reminded me of how I used to make cassette albums as an early teen with my guitar and whatever else I could find in my bedroom.
As I walked into the darkened cinema to see a selection of Other Film (including an amazing short by Tony and Beverly Conrad), the artist himself was standing there - wearing all-black, with a black cowboy-like hat to match. His face looked nervous and frozen.

With a Mosrite guitar flung over his shoulder, and an accompanyment by his Scottish rhythm section, Jandek gently strummed it with his fingers in a Pip Proud way. With a thick journal on his music stand which he took out of his neat leather bag, he sang his way - page by page. At times it sounded like he was talking to himself - thinking about the past, the future and everything in between. And at other times, it was as if he's standing right next to you, and talking about what's on his mind.

Jandek flipped pages for an hour and a half, while the sliding bass and Sunny Murray-like drumming followed the Texan's stream. No hello, and no goodbye to the 25 brave Brisbanites who came along to see him.
Posted by Donat at 4:33 AM No comments: