The Godlike Genius of Danny Kirwan, or a review of Hello There Big Boy! 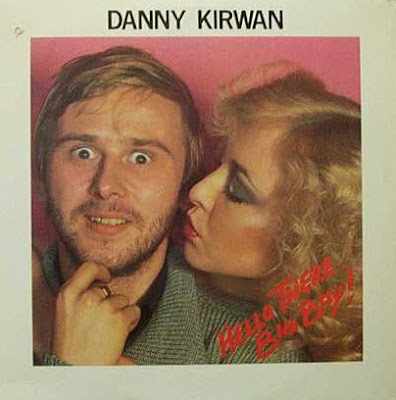 Just about every band worth their weight in antipasto has at least one insane or eccentric member in their line-up at one point or another. Easy example - Keith Moon of the Who. Fleetwood Mac were lucky to boast three of them: Peter Green, Jeremy Spencer and Danny Kirwan. All of them played guitar. They sang songs. Loved Elmore James. They played in the band well before Buckingham-Nicks found their way out in front of Mick Fleetwood and John McVie and created an AOR monster.

Peter Green left Fleetwood Mac for many reasons. One of them was because the rest of the band didn't feel they should be donating their profits to the struggles in Biafra. Peter Green was wearing white robes around this time. As fitting as it looked for someone who's known as the Green God among guitar aficionado circles, Greeny drifted away from music for almost ten years before coming back into music in the 1980s to only drift away for a few more years to be found wearing silly hats.

Jeremy Spencer went for a stroll through downtown Los Angeles during one of Fleetwood Mac's American tours in the early 70s and was deemed a missing person for five days before the police found him safe and sound within the Children of God cult of which he's still a member of today. In a way, it puts you off from listening to too much Elmore James, really. If you end up seeking God after listening to his amazing slide guitar work, then it's not really worth donating 10% of your weekly income to. Spencer released some interesting records in the 70s and in more recent times, but that's another footnote for some other time.

When it comes to rock 'n' roll's acid casualties, we're often made note of Syd Barrett and to a lesser and just as significant extent, the great work of Roky Erickson. People like Danny Kirwan get swept under the carpet, even though his amazing guitar work on Fleetwood Mac's Kiln House still holds ground today.

Monterrey was a great event, as Eric Burdon and the new Animals attested to. Joni Mitchell via CSN&Y's Woodstock spoke of similarly exciting events. And then there's another little festival which could've been.

The Bavarian Woodstock which Rainer Langhans planned never did quite happen. This was in March 1970. The HighFish / Hai-Fisch / Stoned-Shark commune had made a rendezvous with Green and Kirwan at Munich airport in a (strange) attempt to get Jimi Hendrix and the Rolling Stones to play a festival with sauerkraut instead of mud. What became an innocent request to ask members of the penguin-loving Mac to request the services of these two artists to play at his little festival had turned and tuned into a giant LSD binge of which neither guitar-playing gents have managed to recover from.

Not too long after this event (okay, two years and a few months to be a little more exact), Kirwan threw his guitar against a wall in the dressing room and decided to stand in the audience and watch Fleetwood Mac attempt to play a set without him. Mick Fleetwood decided that it might be a good idea to fire him, and off he went.

Kirwan released Second Chapter in 1975 and followed it up a year later with Midnight in San Juan.

It's Kirwan's last album, 1979's Hello Big Boy! which is the focus of attention here. Peter Green at this point had just released his second album, In The Skies and Jeremy Spencer released Flee with fellow members of the Children of God cult. Of course, Fleetwood Mac released the sprawling double LP, Tusk - the commerical flop that had only sold a million-odd copies.

All three guitarists had seen 1979 as the year of AOR, and Kirwan's work is no exception to the fact. Kirwan's guitar work was rumoured to be faded out of the mix almost entirely, and the work of 70-odd musicians turned a mentally-fragile Kirwan recording session into something interesting - kind of like what Phil Spector did to the Beatles last album, one could say.

Today, Kirwan's rumoured to be living in a men's shelter in London, drinking away his Fleetwood Mac royalty cheques and refusing any interviews about his music career.

When you think about it, there's precious few bands from the 60s whose original members are still alive today. There's a few Bluesbreakers line-ups, Cream, the Kinks and Fleetwood Mac - the band who will go down in history for having more nutters on the six-string than any other.

And as much as Peter Green stands head and shoulders above Kirwan and Spencer in terms of adulation and respect, Danny Kirwan's light shines brightly for creating the best lost album of the late 1970s.

Hello There Big Boy! has the Jimmy Buffett sea-breeze, the Steely Dan tightness, the Paley Brothers harmonies, the sensiblity of Gerry Rafferty, and the catchy choruses of Christopher Cross. Naturally, Kirwan didn't like the idea of touring to promote this album - and in fact, the album was almost shelved due to the erratic behaviourisms of Danny's, so the album sank without a trace.

Have a listen, and tell me what you think.

The small town of Dunedin plays host to a myriad of wonderful groups since the late 1970s, and the Clean seems to sit right at the top of that ladder. In fact, they've released a new record this year, and the Bats have done similarly. Strangely, too - the Verlaines have released a new album via a new independent label, Dunedin Music.

Once upon a time, the Verlaines released an album called Over the Moon through New Zealand's Sony branch. And at last count, about five people own this 1998 CD, and I know one of them. It was quite an interesting record - it kind of crossed the delicateness of 1991's Ready to Fly and the overcooked guitars of Way Out Where. You could feel the glue of tobacco paper seep into the microphone from Graeme Downes's lips during Writing On The Wall when he says, "don't say it's over."

Then the giant wait for Potboiler, released on the Flying Nun label nine years later. I have only played it once. Not feeling terribly game to play it again, it kind of left me stone cold. The ghastly cover doesn't help matters - but then again, Way Out Where has a rather shocking cover as well. Bob Dylan's 1981 LP Shot Of Love looks like Roy Lichtenstein's vomit but it's one cracker of a record. Judge, cover, et cetera.

On a recent trip to Christchurch, I walked into an independent record store to find the just released Verlaines album, Corporate Moronic. This worked out pretty famously as I had not planned to take any music along with me to listen to in the rent-a-car for the return trip to Dunedin. I played this album almost non-stop between both cities, pausing for small periods to listen to some classic AM rock on an FM station.

Every rock band I've grown up with in school have disappointed me in one way or another. Sonic Youth really lost the plot after Experimental, Jet-Set, Trash and No Star. Dinosaur Jr really into the ether after Where You Been? There's countless more examples to lay out, and the Verlaines sadly fall under this disappointment umbrella. I hope for each new Verlaines album to sound better than Bird Dog, and they never do. In hindsight, I guess it's that good after all.

After the departure of Robbie Yeats in 1989/90, and Jane Dodd in 1988, the Verlaines have lost a terrible amount of their poetry and zeal for complex arrangements. Some might just put it down to progress. The Velvets got more and more conventional as the years rolled on, so I guess this isn't anything too scandalous.

But in the case of the Verlaines, and Graeme Downes in particular - the band's leader, musical director, composer, lyricist, vocalist and occasional oboe player, it is as if the band of 2009 have forgotten what made them so beautiful - those countless references to cigarette smoking and pub-drinking is one major loss. And I don't think it's a good loss, either. Downes still finds room for doomed love songs, so not all is removed from the lyrical topics of yore.

Corporate Moronic completely removes itself from the Flying Nun era of 1982-1990, and all that's left is Graeme's voice. Thankfully, it's still in good form. So in today's terms it's Verlaines by name and not by nature.

Perhaps Graeme's moved on, and I haven't? He's already written Slow Sad Love Song, Just Mum, and Baud to Tears once - so why am I wanting another song along these similar lines? Selfishness more than likely.

In modern rock terms, I'd much rather listen to this album than the latest Kings Of Leon offering - so as much as this all seems like a giant whine, I should be grateful that the Verlaines exist at all.
Posted by Donat at 3:51 AM 4 comments: