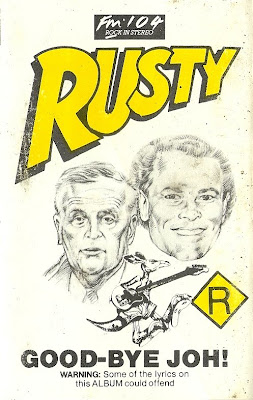 In the days when Chryslers ruled the roads and shows like Kingswood Country proudly represented Australian television in the 1980s, releases such as these seemed to popped up on cassette tapes for the Voxson deck.

If anything, Rusty's Sunshine Satire Volume One is a postcard of Australian larrikinism at its most pathetically primal.

Backed by the Ayers Rockettes which once featured Keith Urban who is in fact rumoured to be on this recording, Rusty belts out a half-dozen risqué tunes that follow a line of humour as noticably seen by the likes of Rodney Rude and Kevin Bloody Wilson.

1. Goodbye Joh
2. Ain't No Fun in Darwin
3. Whatever Happened To Malcolm?

Can you get copies of any of Rusty's albums? The Rockets did the best version of Sister Golden Hair I have ever heard
cheers
oz_lawrence@yahoo.com.au

Can u still get this album as I the tape I had of it was destroyed?
leannewillmer@bigpond.com