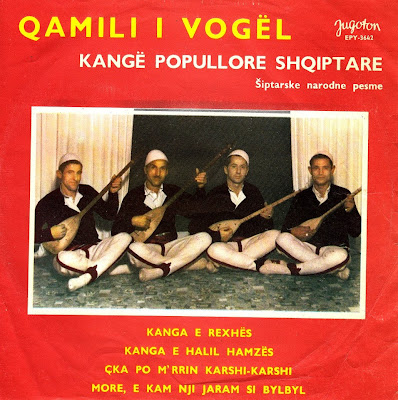 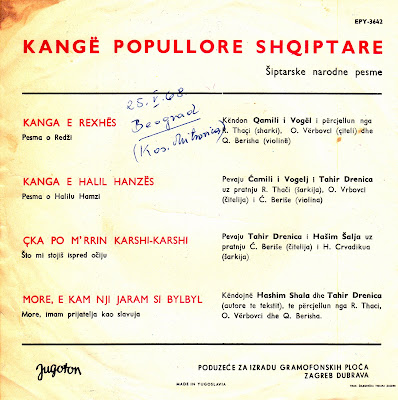 Among the many EPs of Albanian music released via Jugoton in the 1960s by Qamili i Vogël. This dates from 1968 and this pllakë is split between himself and Tahir Drenica singing both cuts on the B side. Though not credited on the front cover, he is pictured second from the left with Qamili to his right.

What I found interesting about this EP was More, e Kam Nji Jaran Si Bylbyl uses the melody of the song popularised by Salih and Feriz Krasniqi from the region of Malisheva who are regarded as perhaps the most revered exponents of Albanian folksongs from the 1940s to the 1980s.

The song in question is Lulzoj Fusha, Lulzoj Mali which vaguely translates as Flowers of the Field, Flowers of the Mountain. Sidetracking slightly here, the interviewer asks Salih Krasniqi about the sources of the songs and their repertoire.

They go on to say that they have played 500 different songs. Songs they've written. Songs they've learned. Songs they heard from their fathers. Songs of history. They'd travel far from village to village by horse and cart, finding songs from locals.


With the rapid westernisation of Kosovo post the 1998 war, such songs and insights will slowly fade away if not preserved properly. It's a great pity that with the advent of the internet in the past decade we have not seen a great deal of discussion or insight on Kosovo's rich Albanian musical heritage in English, let alone in its mother tongue. Hopefully with such postings, such musical treasures will spread past poorly annotated postings on Youtube and in a place where it's far more easily accessible by those who are interested in this peculiar type of Balkan music.