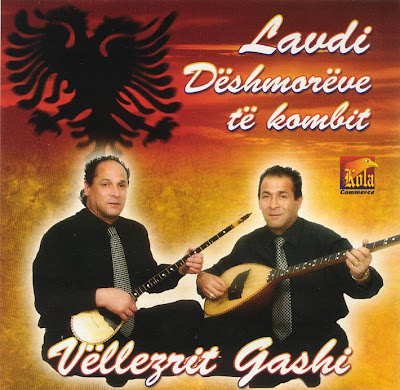 Vëllezrit Gashi are one of the few purveyors of Albanian Epic Poetry still being performed in the Drenica region of Kosova. This particular style of music is locally regarded as Këngë Burrash - men's songs.

The choice of musical instruments on this recording are a mixture of west and east - the piano accordion and violin, with the more typical Sharki (5 stringed lute), Qifteli (2 stringed lute) and Def (skinned tambourine). Line-ups of this sort are most common in the Drenica and Dukagjini regions, though many don't use the accordion as a melodic instrument for one reason or another.

The nature of Albanian epic poetry is a songster tradition that's brought down from generations through a telling of stories regarding the heroism against oppressive regimes from the Ottoman Empire though to the more recent Serbian antagonism in post-war Yugoslavia.

In previous posts, I have regarded this style of Kosovar music as Gangsta-Folk out of its sheer aggressive tone, and a subject matter which relates to war and survival in a threatening rural landscape. This 2007 CD is another example of Gangsta-Folk at its finest, though without the gunfire that's common in their live bootlegs of which are readily available in street markets throughout Kosova.