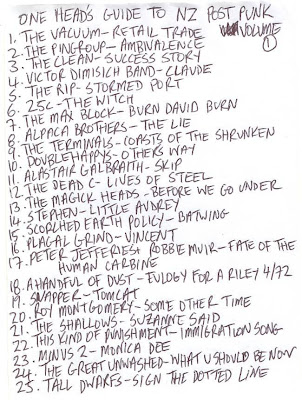 25 songs in under 80mins. Was making an attempt to not go for the obvious acts, or of the AK79 variety etc. The sad omissions will appear on Volume 2. 95% of these acts are from Christchurch, Dunedin or both. Oldest track here is the Vacuum from 1979 and most recent is Minus 2 from 2009. If you're hoping to find further works from any of these artists, then prepare to look hard and carry a healthy wallet, as many of the songs found here are from out of print albums or singles.

THE VACUUM - early Bill Direen with Peter Stapleton and Stephen Cogle who make up part of THE VICTOR DIMISICH BAND and THE TERMINALS. Peter also played in SCORCHED EARTH POLICY and THE PIN GROUP with ROY MONTGOMERY, who in turn played in THE SHALLOWS with Mick Elborado who played in THE TERMINALS , MINUS 2 and SCORCHED EARTH POLICY who feature Brian Crook of THE TERMINALS and THE MAX BLOCK, as well as Mary Heney played in THE SHALLOWS, 25 CENTS, THE TERMINALS and THE VICTOR DIMISICH BAND. THE CLEAN features Robert Scott who once played in THE MAGICK HEADS and David Kilgour who formed a band called THE GREAT UNWASHED in the mid 80s, and STEPHEN in the later part of the decade. THE DEAD C features Bruce Russell who formed A HANDFUL OF DUST with ALASTAIR GALBRAITH of THE RIP and PLAGAL GRIND respectively. Robbie Muir played in both bands and PETER JEFFERIES from THIS KIND OF PUNISHMENT played in PLAGAL GRIND. THE ALPACA BROTHERS features a guest appearance by PETER GUTTERIDGE from SNAPPER and the GREAT UNWASHED.

Well, heck! Sorry I'm so late to the party - this looks absolutely wonderful! Any chance of a re-up?
Thanks for taking the time to make such a great comp. :-)