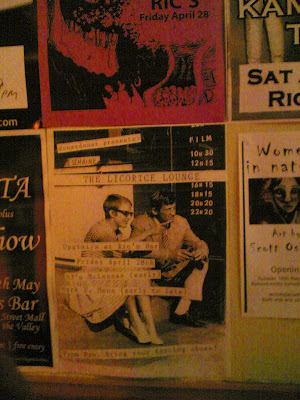 Some of you may have once attended the Licorice Lounge which was held every second weekend at Ric's Bar here in the city. I named it such out of a tribute to the Liquorice Lounge, a short-lived club which was held at the Treasury Hotel (and other venues) around '89-'90. The Liquorice Lounge of then played host to the Holy Ghosts, Small World Experience, Wondrous Fair, the He Dark Age and many other links to the Brisbane post-punk music scene of the late 70s and early 80s; a time and space which I've researched for more years than I can remember.

I bumped into Grant McLennan one night and told him about this night I have, and whether or not he'd be interested in playing some tunes. He was quite amazed at my play-lists and the French and German New Wave films I would show on the big screen upstairs at Ric's. "Do you really play Orange Juice and Dusty back to back?"

He wanted to be billed as MC Lennan, and so it was done. Little did anyone know that it would be his last public appearance. I recently recalled a CD I had put together of some of the songs he and I played that night, so here it is.

Id love to be able to download this as a podcast donat, thats a fantastic story thanks

hey donat - thanks for the comment - timely as i've just finished another clowns binge and was considering trying to crowbar the experience into words again - and was only the other day pondering the depths of bob farrell's GOMA set once more, and wondering if anyone had recorded it - reading back, that piece seems perhaps a touch excitable and ill-informed at certain points - but still maybe captures the sense of a mind trying to think about all the things that make an amazing band amazing simultaneously - by way of closing, and in the hope you might enjoy it, here is a prince melon flyer that i picked up at a record fair a while ago - http://users.tpg.com.au/rlmohr//princemelon